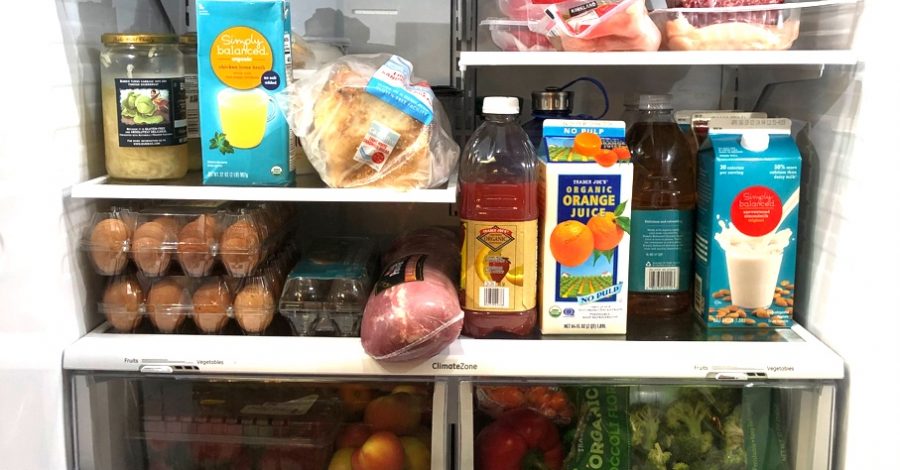 Before you start sizing up your fridge next to mine, let me preference that this is after a Costco trip and before that, the fridge looked pitiful and had been ravaged by all the many that live in this house. I do, however, have to admit that one of my favorite things is a full fridge.

I love to arrange it and I love to see it full of colors and healthy things that my family can enjoy without all the guilt. Making a fridge pretty is fun for me even though the reward of seeing it this way doesn’t last long and soon it’s an empty box once more.

But you wanna know the real reason why I love a full fridge?

Because it reminds me of how blessed we are.

There was a season in our life where we didn’t know where our next meal was going to come from. Sure, my parents lived down the street from us and allowing us to starve would have never happened on their watch. But the struggle of the unknown was real. We had one child at the time and a breastfed newborn. I remember being so thankful that my body could produce free food for her as my husband had lost his job 30 days before she was born, leaving us to pay in full for her birth. Which of course was just debt unpaid along with the many other things that would soon pile up in a mountain of impossibles.

One evening we were eating spaghetti for the third time that week when we heard a knock on our door. The babies were asleep and Wade and I were sitting in our small kitchen, swirling Great Value brand noodles around in the cheapest sauce we could buy, discussing HOW were we going to make it. Struggling for answers and struggling with hope, we answered to a friend who was standing at our doorway with a hundred dollar bill. He said, “I had laid down for bed that evening and the Lord told me to get up and come over here.” He said I figured y’all needed it since the Lord made me get out of bed. We could write a whole book about the servant’s heart and the obedience he displayed to come over to our house that night. But let’s just rest in that last comment… we needed it. We all know a hundred dollars won’t go far in today’s world, but we also know that when we have nothing, something is always more than enough.

That night, we were given something much more valuable than a hundred dollars. We were given HOPE. In a season where every door seemed to close and there were so many impossibilities, these kinds of miracles carried us through. We would rely on these miracles to provide us hope in a desperate time but we would also have a front-row seat to watching our faith grow in God and our marriage.

When Wade’s retirement money was all cashed in, when the companies said he was overqualified (the trash company wouldn’t even hire him) and the medical bills from being uninsured became too much to handle, we humbled ourselves and went to the Department of Social Services for help.

I think we just kept thinking… we can do this. We can find a job. We can make ends meet. We will pay that bill later. We will make it work.

We needed to humble ourselves and realize that nothing we could do would change this situation until we realized it wasn’t about us.

I still carried a Coach Bag from the lavish season of life we had once lived. It was one of the few things I still had from the many yard sales we had to survive. I looked down at my Rainbow flip-flops as I walked in the crowded room and I wondered if I was going to be the judge. Maybe I wasn’t dirty enough. Maybe I should have dressed worse or left my hair uncombed. I looked around and asked myself, why are we here, God? We don’t belong here. I remember the shame as we walked back to the social worker with my Coach purse and all of the comments of others rattled my mind…

They don’t deserve Welfare. The system is broken, taken advantage of, overused and drains the wallets of the hard-working Americans so that lazy people can get free stuff.

Was I one of them?

Over time, that EBT card became our best friend as it put food on our table for years as we searched for work. The WIC stocked our shelves full of food for the babies and even gave us enough to give to others in need. The free diapers and baby stuff helped tremendously as we had two babies, just 17 months apart.

And most importantly, I learned that I was one of them. We were all the same. I became more and more comfortable sitting for hours in the DSS office. I began to meet women who shared their stories with me. My heart began to change as I listened to them and I realized that more than anything, they wanted to get out of the vicious cycle of poverty but it was hard. Especially when you don’t have help. Many women lost their jobs because they had to spend hours of time at DSS waiting, but yet they didn’t make enough money at their hourly job to forego DSS services. They needed it. We needed it.

We were the same. But yet many didn’t have the hope that I had in Jesus. And without that, you were defeated. How do you climb the ladder out of poverty (or any desperate situation) without Jesus? It was a question I asked myself every time I sat beside someone new. Same struggle, same needs, different Resources.

My heart was opened up to a whole new world in this season and I no longer resented the lack but became grateful for the enough.

It would take us 8 years to slowly see a change in our circumstances. For many years, food stamps were still a need and when that wasn’t, my parents usually helped. They would come for a visit, see an empty fridge and fill it up with a trip to Walmart. We’ve sold houses, we’ve rented houses and apartments that look and smell terrible but met the budget, we’ve sold cars, we’ve shared a car, we’ve asked for help from family, we’ve ruined our credit, we’ve switched jobs, we’ve worked side jobs, we’ve pawned stuff to buy gas, we’ve stolen from our kids bank accounts, we’ve depleted college funds and 401k’s to pay bills… we’ve done it all.

But God has been so good through it all.

This fridge, this house we live in now has been my Ebenezer. My reminder of how GOOD our God is and that He has been with us in it ALL. The journey hasn’t been easy and even now, things are still “iffy” in moments and we still have dreams that we can’t afford. But I believe that one day they will come to pass and we will look back and we will see that HE, instead of WE, was the one that afforded the costs of making our dreams a reality. And we’ve learned… that is exactly HOW we want it to happen.

Wade and I look back and it’s comical how we’ve made it. We laugh at some of the stories. And we cringe at some. But His faithfulness has proven true.

I want to encourage you to keep praying. It would have been easier to pray and have all of our needs met in one day. God could have provided a job sooner than 3 years. He could have given us a big salary, paid all our bills and given us all the riches of heaven with one snap. But we would have missed out on so much…

The conversations with the many who waited at the DSS office and the social workers who worked tirelessly to make lives better. We would have missed out on the miracles of those who felt led to pay our mortgage, fill our fridge or buy our gas in order to get to work. These miracles brought lasting friendships to some and a memory of Hope, that we will always look back on as proof of His Faithfulness. We would have missed out on the creativity it took to start not one, but two businesses that would seem to get us nowhere. The absence of resources forced us to become the creative people we are today. This season taught us how to take nothing and make it something.

So keep moving forward. He is faithful to finish what He starts… just keep praying and He will fill your fridge and give you a happy heart. In His time.

The fruit of your womb will be blessed, and the crops of your land and the young of your livestock—the calves of your herds and the lambs of your flocks.

Your basket and your kneading trough will be blessed.

The Lord will grant that the enemies who rise up against you will be defeated before you. They will come at you from one direction but flee from you in seven.

The Lord will send a blessing on your barns and on everything you put your hand to. The Lord your God will bless you in the land he is giving you.

The Lord will establish you as his holy people, as he promised you on oath if you keep the commands of the Lord your God and walk in obedience to him.  Then all the peoples on earth will see that you are called by the name of the Lord, and they will fear you.  The Lord will grant you abundant prosperity—in the fruit of your womb, the young of your livestock and the crops of your ground—in the land he swore to your ancestors to give you.

The Lord will open the heavens, the storehouse of his bounty, to send rain on your land in season and to bless all the work of your hands. You will lend to many nations but will borrow from none.  The Lord will make you the head, not the tail. If you pay attention to the commands of the Lord your God that I give you this day and carefully follow them, you will always be at the top, never at the bottom. Do not turn aside from any of the commands I give you today, to the right or to the left, following other gods and serving them.