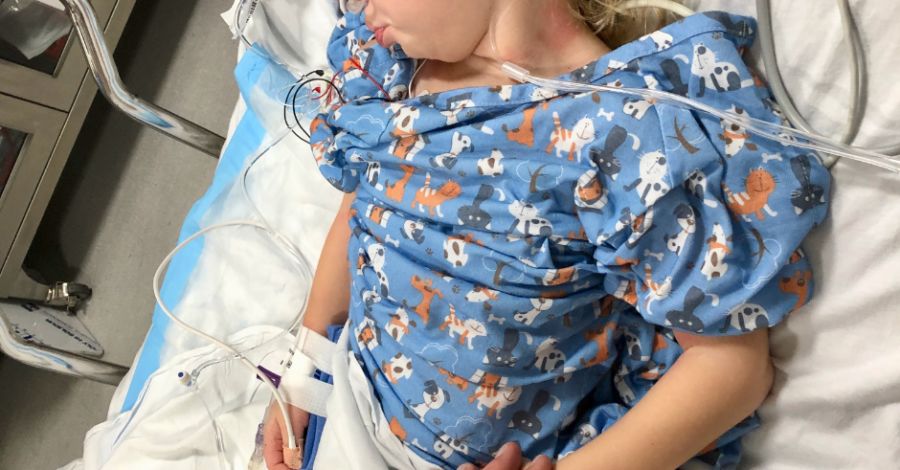 This year we decided to send our kids to school. The reasons for jumping ship from homeschool to two in public and one in private, we’ll save for another day. Needless, to say the weeks prior and the week of school starting was a huge adjustment for our family. The littlest started Preschool also. Every day there would be tears before and naps after because she too was having a hard adjustment to being away from mommy. However, we had pushed through our first week and Friday had finally arrived.

I went to wake the baby and could feel the heat radiating off of her little body. Normally, a fever is a fever in our house and we let it take its course. For some reason, I decided this time was worth a trip to the doctor. She slept through the whole exam and we left with an antibiotic for the double ear infection and possible strep. By that afternoon, she had only awoken once, wasn’t eating nor drinking. Next came the puking. We had a follow-up appointment the next day so we did everything we could to avoid the ER and keep her comfortable.

But deep down, I knew something wasn’t right.

The next morning’s appointment went as Wade and I both expected. She wasn’t able to move her neck at this point and her fever was 104 on Motrin. They wanted to take her by ambulance, but Wade insisted he could get there on time. Several tests, an IV and eventually a Spinal Tap took place revealing she had white blood cells in her spine.

All of this went extremely fast as hospitals do but yet time seemed to stand still. I remember the slow tears that ran down the face of my husband as he slowly signed his name to the paper that listed all of the side effects that could take place as they administered the Spinal Tap. The hand on my shoulder of the friend who came to sit with us in the ER as tests and doctors swarmed in with words and results our brains could not quite process. I remember the strong taste of the blueberry juice I picked up at the hospital cafeteria because it was 4 pm and we had neither breakfast nor lunch. I remember seeing her eyes slowly open, all to close again after the procedure when the anesthesia began to wear off. How much I wanted her to sit up and beg to go home at that moment. We wore masks as we walked up to the pediatric floor and they began to administer the meds for meningitis and admitted our baby girl.

The next 18 hours were the hardest.

She was in so much inconsolable pain that no mom or dad ever wants to hear. Trying to comfort her as she entangled herself up in the IV trying desperately to get relief from the leg and stomach pain she felt but I realized quickly this was out of my control. I could hold her but she would fight me. Talk to her but she would outscream me. I could request over and over that something be done by the nurses, but they would ignore me knowing that this too shall pass and their knowledge was greater than what I could possess in the moment.

The hardest moment came when she didn’t know who I was. At that moment, I cried out to God like I never have before. I texted friends to pray and I pleaded with God to be near. But amidst all of the pleading, I felt so strong. It was a supernatural strength and with each ding of my phone, I knew prayers were being sent.

She was screaming but my phone was dinging with so many texts of prayer and somehow deep down inside I knew all was going to be okay. I knew she would leave better than she came and I knew this was for a purpose. However, knowing this didn’t diminish the pain.

Sunday evening, my girl woke up from a nap. I was expecting the pain to start up and I kept preparing myself for it to come. It never came. Sunday was her day and from there we saw a great improvement in her health.

This was also the day, that I received so many texts about others praying. Whole churches and youth groups, Sunday School classes and Safety Teams. From North Carolina to Florida to Puru, others were selflessly praying for our girl and I knew that this was the reason why I had felt such Strength. These prayers were the reason why she was in less pain. These prayers were part of the purpose as a whole of why we entered the hospital, to begin with.

I had forgotten the power of prayer.

The kind of prayer that knows no limits.

Our girl left the hospital on Tuesday afternoon with smiles and her arms wrapped around her daddy’s neck. She left just as she should have, happy and whole. But as I walked the blank white walls and smelled the smells of hospital food trays, I heard a still small voice say…

Sit with me in the pain.

I pondered these words as I looked ahead at my smiling girl leaving behind countless others in their rooms waiting for the same kind of answers. They would stay a little longer. Some a few days and others may never leave. Knowing this and the reality of the hurting world we live in, I prayed for God to help me to remember the pain.

I asked that he would help me to remember the pain, the smells, the need, and the uncomfortable-ness of being in a hospital completely out of control.

I asked that He would help me to sit with Him in the pain.

Pain hurts. We want it to end. We want out. To be over. We want to make it to the other side. And all of that is normal. But I also know and understand the value of the pain and what He can do through our hurts when we are enduring.

Ironically, I spoke about Job at my last local women’s study. My husband joked and said I was never allowed to teach on Job again. However, his life and his story of deep pain was something I clung to when I was alone with my girl in that hospital room. The story of Job gave my other three girls hope when they began to ask God, why. It was a story of Truth that made me know all was going to be ok and that asking WHY would probably be a waste of breath. Instead, I began to ask Him to be near?

Just as Job did, I knew that in His presence I could endure the pain.

God was in the hospital room with us for those four days. I had never felt so close to Him as I did in those moments of pain. It’s no wonder that He would ask me to stay there.

I can still picture the white walls as I left the hospital that day. The moans that crept from each room as you walked the long stale hallways. The sticky floor under my socks as I paced her bed that seemed to swallow up her little body. The red botton that reminded you that you were never alone. The food tray that would come without request because food ministers to pain. And that window that reminded me that life existed outside of those bland walls and that even in my darkest hour, the sun was still shining.

When I find myself too busy to connect to my people or exhausting myself over the things of this world, I go back to those bland, white walls and the smells of the pain that surrounded me that day. I go back because it reminds me to sit with Him a little longer.

To stay in the Pain is to remember that He is with me in it all.

I want His presence in every portion of my life. The pain. The prosperous. I want it all. But sometimes life gets busy and I forget to sit.

You may be in a season of fruitfulness. A season where your prayers are being answered and your soul is fulfilled. Sit with Him.

You may be in a season of deep strife and question. You may be hurting physically or watching those you love most hurt and ache. Sit with Him.