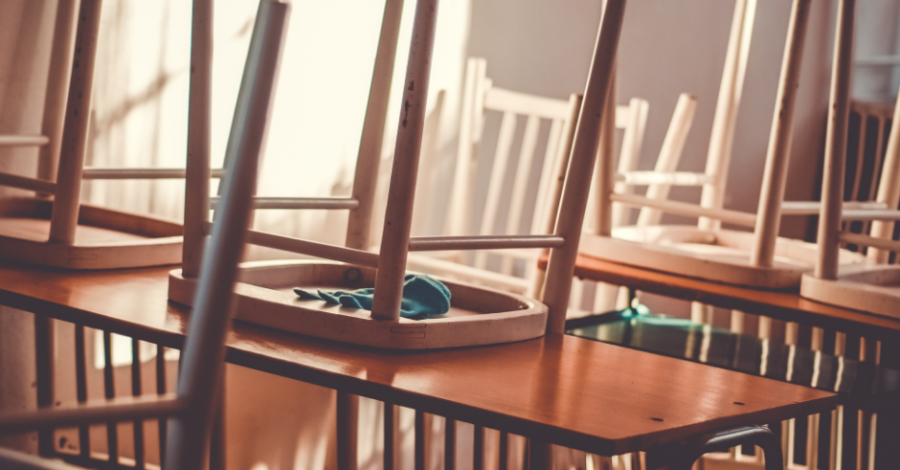 I thought about it the day that schools shut down on March 13th. I thought about those kids and what they must feel at the idea of staying home. Wade and I had just finished our fostering classes a few weeks before the country shut down. A class that we felt God was calling us to but would have been easier to ignore and avoid. The class that brought fulfillment but also stories of deep pain about the everyday crisis that children are living in. This class revealed the tragic reality of the world we live in. So when the country shut down, we were left asking, what about those kids?

Long before I had children of my own, I was a classroom teacher.

First grade to be exact and I had a child named Mory. Mory was quiet and reserved. He didn’t press much for attention nor did he ever stick around to ask questions after class was over. His favorite part of the day was always lunch and recess and he usually always did what he was told. He never raised his hand or offered answers and sometimes slept in the book corner where the beanbag rested. His eyes would gently close as we did math problems while sitting straight up in his desk. Sometimes during reading groups, I would notice how bloodshot his eyes were against his dark brown skin.

Mory was one of my favorite students. He always treated me with respect, said yes mam, and had a sweet endearing smile that would come out over the simplest of things. He never complained about the cheap candy I passed out nor did he ever moan and groan when I asked him to clean up the classroom.

Mory wore the same pair of shoes every day. He also smelled of dirt and sweat. Like most of the kids, Mory was on free and reduced lunch. His mom was single without ever showing up for a conference or school function.

However, one day we were writing about nocturnal animals. Mory seemed very interested in the subject and afterward, he came to my desk and began to share about his pet. His pet was always up at night, would rummage through his things and even though his momma had told him to leave it alone he made a few attempts to touch his new friend. He was black and white and had stripes with big yellow eyes. A fluffy tail was the signature characteristic that led me to ask, “Mory, is it a raccoon?” His eyes lit up when he said, “Yes! That’s it!” Mory had a pet raccoon.

After lots of questions, we discovered that Mory had a large hole in his side of the trailer in which he lived. His room was next to the trashcans and every now and then, his newfound friend would make his way into Mory’s bedroom in the middle of the night. Mory would stay up late losing sleep watching this critter because even though he was slightly intrigued, he was also very cautious of this creature.

DSS and I became close friends discovering the inadequate housing that Mory’s mom lived in, the amount of time Mory spent alone, and the lack of basic needs found in his home. It was no wonder that lunch, recess, and naps were so crucial in his young life.

This is one small example of an experience I had as a classroom teacher. One conversation about nocturnal animals led to the denial of basic needs that most often we take for granted. Teachers rallied around this family and gathered clothes, food, and gift cards for this momma. DSS worked with her to get the hole in the trailer fixed and soon after, Mory’s mom came to her first parent-teacher conference.

But what about those kids?

More often, stories don’t always go as Mory’s did. I don’t know what happened in his life after this. After all, he would now be a freshman in college (hopefully). But so many kids are at the mercy of their teachers and the eyes that protect them when they are away from home. But what about those kids who are stuck at home without those extra eyes of protection? What about those kids that used to get their food, their recess, their encouragement, and their safety from the eyes, ears, and hearts of the teachers that loved them so well.

I know that every teacher is aching over those kids that are just like Mory.

My newsfeed has been full of articles and news reports of stories starting to surface. Stories of abuse, neglect, and hurt. Violence and abuse are often hidden. Sexual abuse is often silent. Neglect is unseen. But what about those kids?

We can’t reopen the schools. But we can be vigilant where we are. Get out of your homes and start walking your neighborhoods. Talk to the neighborhood children. Pray over the homes you pass by. Ask your classroom teacher how you can help. Trust me, if you give your child’s teacher a gift card, clothes or other basic needs for a child in their classroom, they will find a way to get it to them.

For me, I’ve spent too many days guarding my own children against a virus that they may never get. I have forgotten about those kids that are not hiding from a virus, but hiding from something far worse. A sickness of hurt and brokenness that has plagued them their whole life. A sickness that is made worse without the eyes and ears of the outside world.

What about those kids?

They need your prayers. They need your thoughts and they need your attentiveness. Find ways between now and August to get to know your communities. If you are financially stable in this season, head to other areas of your city and find ways to love those that need it most. Serve at local food banks, call your local schools and your local children’s pastor. Join foster family organizations and ask how you can help foster families who have kids coming in and out of their doors.

Mory’s mom needed help. She may have neglected her son and put him in danger, but she too felt neglected. Hurt people, hurt people. Love interjects the hurt and has the potential to change lives.

In Hosea, the word says…

I will give back her vineyards and will make the Valley of Achor, a door of Hope.

Achor means trouble and where there is trouble, God says He will make A Door of Hope. In the darkest of days, there is always a Door of Hope if we all choose to be His light and reflect His goodness to those that need Him most.

God, help us find ways to be A Door of Hope for others around us. In Jesus Name. Amen.